The art of portraiture – the making of a recognizable likeness of a particular person – involves looking very closely at the ‘sitter’ and trying to copy their features as accurately as possible. For many centuries during the Middle Ages artists seem not to have done this at all: they enjoyed creating images from their own imagination, and when they needed inspiration they tended to look at the work of other artists. No one knows exactly when, or why, medieval artists began to observe and copy things they could see in the world around them, but by the beginning of the fifteenth century the process was well underway in Europe and some portraits had already been made. Then, during the 1420s, the potential of oil painting for depicting things in a way which made them look astonishingly real began to be realized. This new development was to have a transformative effect on portraiture.

It was in the ‘Burgundian Netherlands’, roughly modern Belgium with part of the modern Netherlands and part of northern France, that expertise in the technique of oil painting was most highly developed, and so it was here above all that portrait painting flourished. To appreciate what could be achieved, consider this portrait of a lay brother of the Carthusian monastery at Bruges. Shown alongside is a close-up view of the sitter’s head and shoulders, so that you can see the minuteness of the detail with which his face is painted. Look at the folds in the skin beneath his eyes and the way the hairs of his beard are painted individually. Notice too that the artist has placed the sitter near a source of light so that his face is quite brightly illuminated. The rest of his head is in shadow, and the artist has used the contrast between light and dark to create an illusion of three-dimensionality, even though the image is painted on a flat surface. The effect is similar to a modern high-resolution photograph, and to people who had never seen this kind of painting before it must have seemed little short of miraculous.

We do not know why this portrait was painted. One suggestion is that the sitter’s family commissioned it because after he entered the monastery they would not have been able to see him very often. At any rate it would have been a private portrait, intended to hang in someone’s house and be seen by only a limited number of people. The next portrait image shown here, of Philip the Good, duke of Burgundy, who ruled the Burgundian Netherlands from 1419 until his death in 1467, served a very different purpose. It would have been displayed in one or other of Philip’s palaces and would have been seen by many people – not only the duke’s servants but also his courtiers and councillors and the ambassadors who were sent to his court by foreign kings and princes. Moreover, the image would almost certainly have been copied so that versions of it could be hung in more than one palace (as a reminder of the duke’s presence when he was not there in person) and be sent abroad as tokens of friendship with other rulers.

This was, therefore, a much more public image. It was intended to present Philip to the world in a way which promoted a particular view of him – a view which was carefully designed to reflect his own self-presentation as a ruler. Philip was by all accounts a very grand person: he surrounded himself with pomp and pageantry and cultivated an aura of imperial graciousness. When he appeared in public his clothes were always of the most costly material. He often wore black, partly as a sign of mourning for his murdered father but partly too because black was a very expensive dye; it also gave his appearance a sombre impressiveness which marked him out among his courtiers. And so he appears in his portrait image, gazing into the middle distance with an air of calm authority and wearing in addition the jewelled collar of the Order of the Golden Fleece, which he had founded in 1430. In depicting Philip’s face the artist avoided the kind of intimate detailing we have seen in the Carthusian portrait, as if keeping himself (and us) at a respectful distance from so important a patron. His aim instead seems to have been to emphasize the distinctiveness of Philip’s features, and in order to do this he used a little exaggeration. Philip clearly had a rather long, narrow face, and it looks as though the artist added to this by making his eyelids almost impossibly tall, with the eyebrows placed high above them; this in turn gives Philip an extremely long nose. The result was an image in which the duke’s most characteristic features were accentuated, thus increasing its recognisability and ensuring that it would be practically impossible for it to be mistaken for a portrait of anyone else.

It did not take long for Philip’s son and successor, Charles the Bold, to enter into an alliance with King Edward IV of England. In 1468 Charles married one of Edward’s sisters, Margaret of York, and the close ties between the two rulers led to the English court being strongly influenced by the magnificent culture of its Burgundian counterpart. Edward’s portrait, known from the later copy which is shown on the next page, was almost certainly painted by an artist brought over from the Burgundian Netherlands. Again this was a public image, and we can probably assume that, as with Philip’s portrait, it showed the king in a way which accorded with his own wishes and in fact formed part of his self-presentation. Edward’s love of fine clothes is well known from the written sources and his costume here is more ostentatious than Philip’s. His elaborately patterned gown would have been made of velvet cloth of gold and across his chest are strings of pearls from each of which hangs a jewel set in gold. Again his face is not treated in a closely detailed way, and the emphasis was clearly on projecting an image of Edward which reflected his public character: not only is he magnificently dressed but the portrait also conveys an impression of his self-confidence and the warmth of his personality. Edward’s motto when he became king was counfort et lyesse (‘comfort and joy’), referring to him as a ruler who would bring happiness to his people, and it is perhaps not too fanciful to see his portrait image as having been designed with this in mind.

What, then, are we to make of Richard III’s portrait image, seen here in an early copy which is probably a faithful reflection of a lost original? The original portrait would again almost certainly have been the work of a Netherlandish artist, and Richard is shown in a similar way to Edward in terms of both his pose and his costume. Indeed, this may well have been deliberate as it was a way of linking the two images; displayed near the portrait of Edward, Richard’s portrait would have made him look like his brother’s natural and rightful successor. But there the similarity ends. Richard’s face has none of Edward’s relaxed confidence; what we see instead is a determined and rather intense expression. This contrast may also have been deliberate. Remember the extraordinary criticism of Edward’s rule which was included, no doubt at Richard’s request, in the act of parliament of January 1484, in which Richard’s title to the throne was set out and confirmed. Richard clearly wanted to be seen as a very different kind of king from his brother, and the message was that his virtuous character would be a guarantee of good government. Moreover, his motto as king was loyaulte me lie (‘loyalty binds me’), a statement of Richard’s determination to fulfil his obligations to everyone who depended on him – which, since he was king, meant everyone in the country. As with Edward, it seems likely enough that Richard’s portrait image was intended to go together with his motto: in their different ways both were expressions of his character as king. 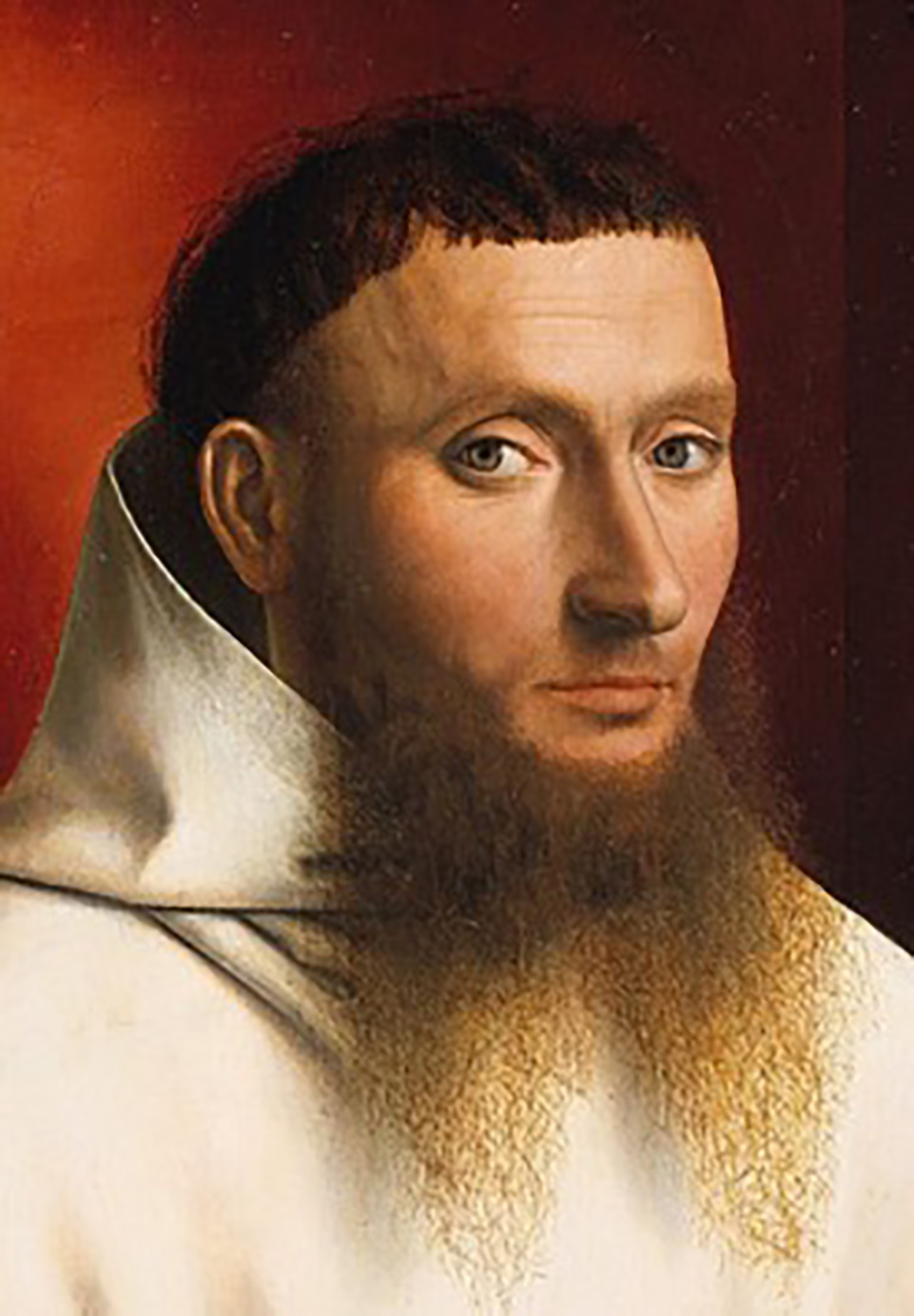 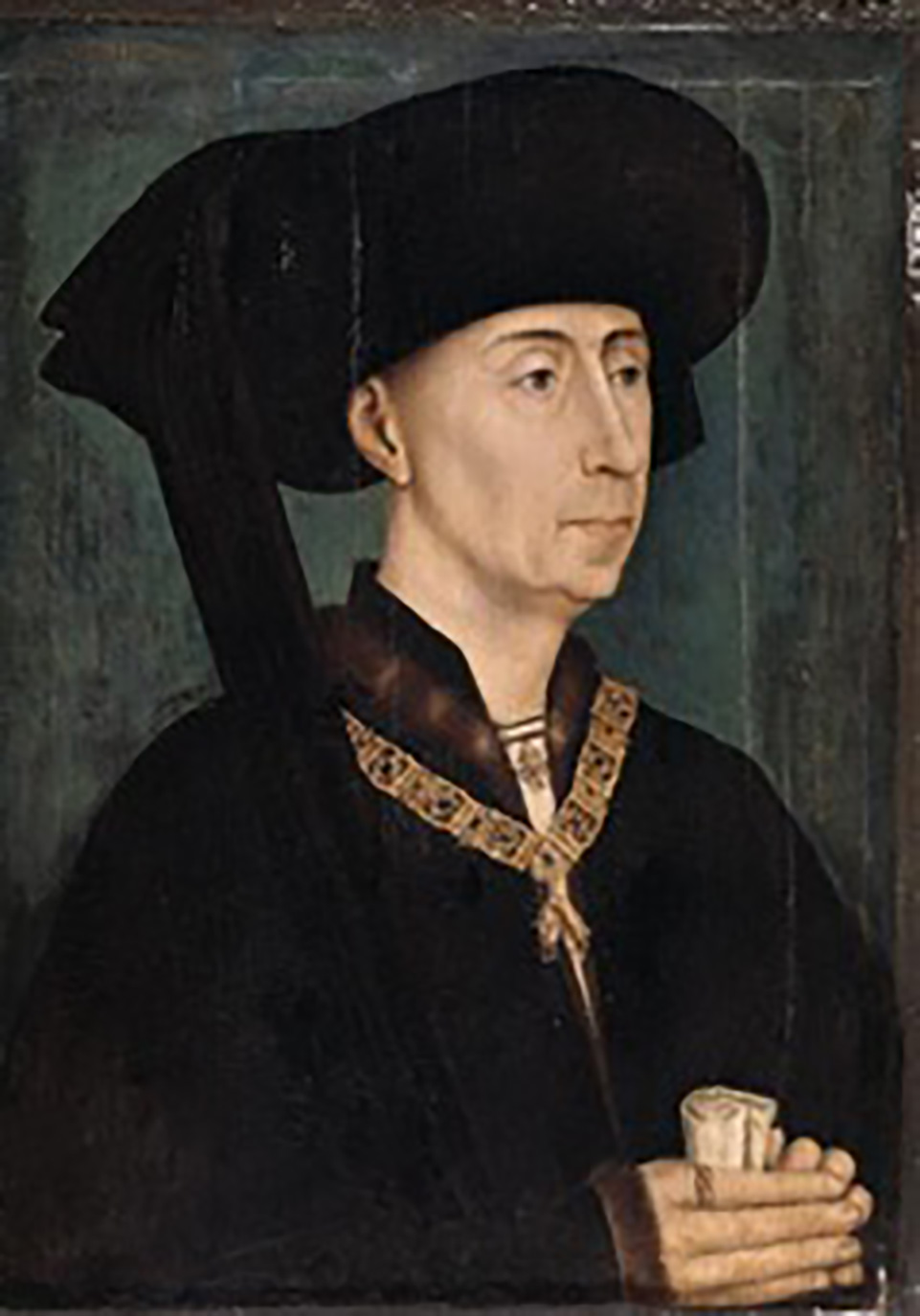 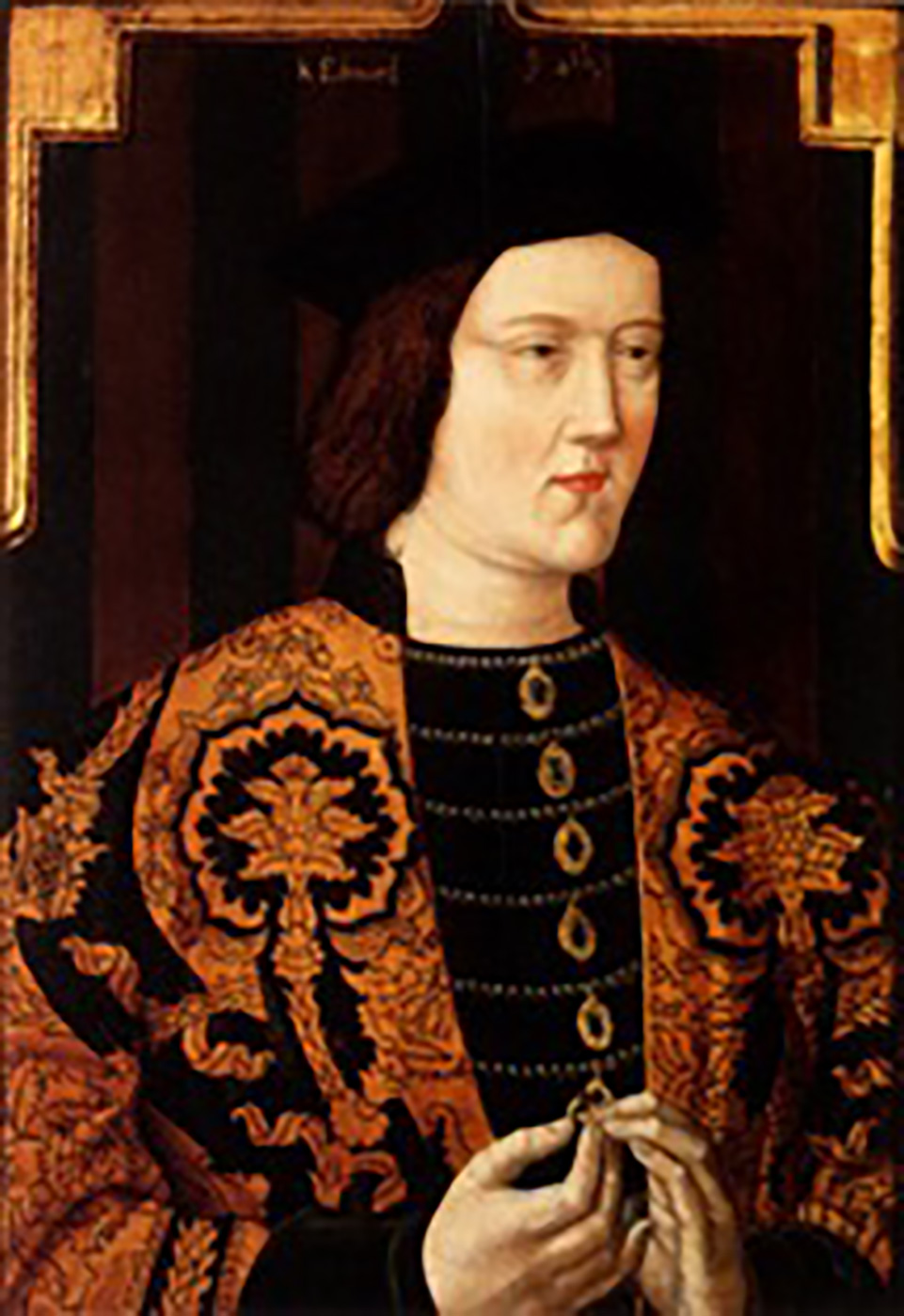 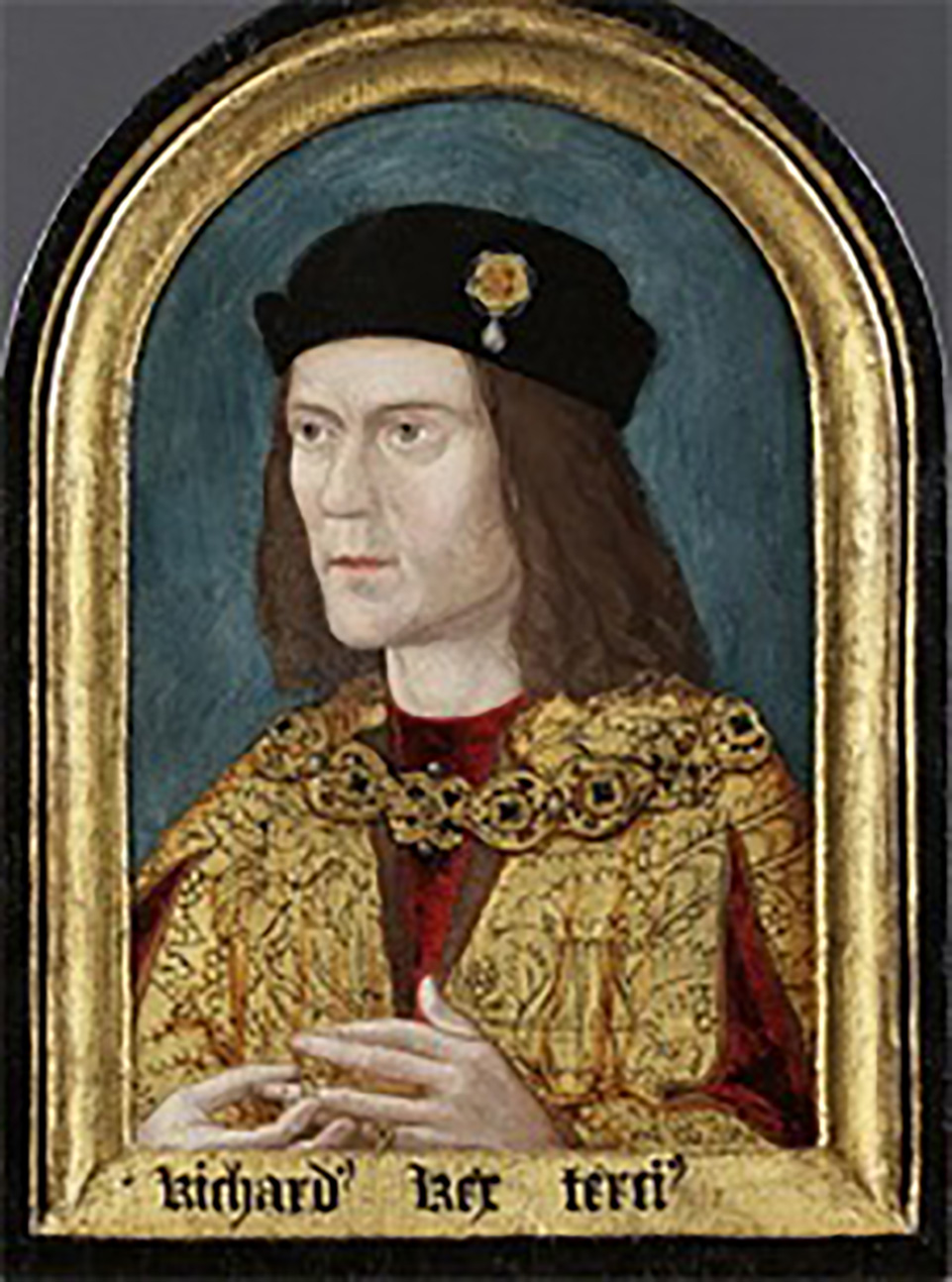